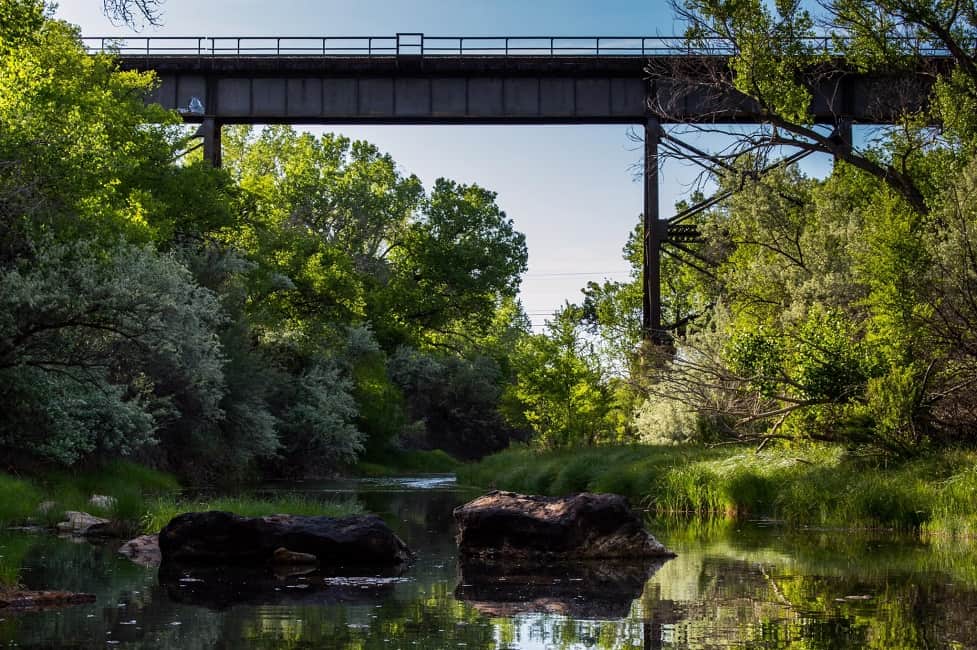 Pecos River Bridge is one of the most historical bridges in Santa Rosa and a famous local attraction.

The Pecos River passes nearby Santa Rosa, flowing between New Mexico and Texas – it extends more than 926 miles and ends in the Rio Grande. During the 19th century, the river marked where the Wild West began. There are several saying about the Pecos River marking a somewhat unchartered land where anything goes.

The Pecos River Bridge was built in 1892 to allow freight passage over the river. It was established as part of the continued movement of railroad progress towards the west. It continued to service freight trains until the 20th century, making it a long-standing bridge and useful even in modern times.

Today, the Pecos River Bridge is a favorite tourist destination for:

Pecos River Bridge is one of the most scenic bridges in New Mexico. Knowing its history and seeing the preserved steel bridge gives it even more appeal, especially to those interested in historical sights along Route 66. Old photos of the bridge revealed the mostly barren land surrounding it when it was first constructed, but over the years, thick, lush greenery developed around it to create the picturesque scenery.

The bridge was made even more famous when it was prominently featured in a film adaptation of the novel The Grapes of Wrath. Visitors can enjoy views of the bridge from the same film location.

There are several places to get the best viewpoint of the bridge. Many people enjoy views from the ground level to get a sense of the towering height over the river. There are also nearby picnic overlooks of the bridge so that you can enjoy a meal near the historic site. The best viewpoint is located at Highway 54 between 1st and Riverside.

The old bridge has an Old Western charm that makes it a popular place to go for photography. Over the years, people have taken photos of the bridge from various viewpoints to capture it in different stages of development and with freight trains crossing over it.

For the best photos, wait until the river is at full flow to get a sense of the rushing water beneath the bridge. Although now you won’t see trains crossing it, it’s a mainstay thanks to Hollywood and a notable attraction to capture during your travels along Route 66.

There are a few bridges that replaced the Pecos River Bridge, including the Santa Fe Railway, located nearby, which is also worth checking out. It’s a short distance upstream, so you can easily include both destinations in the same trip.