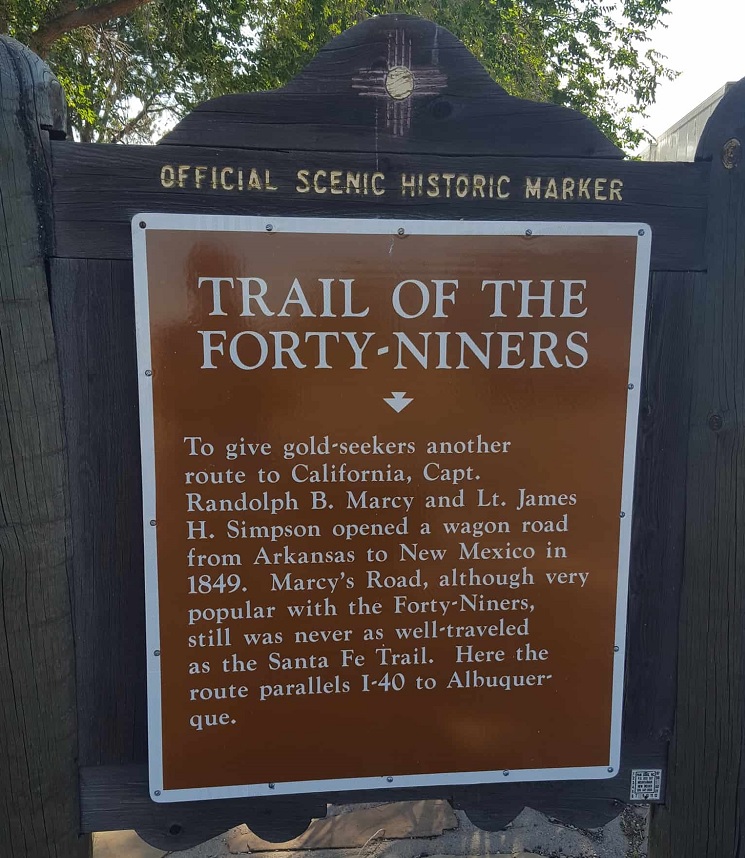 Trail of the Forty Niners is a roadside attraction commemorating one of the alternative routes along the historic Route 66. The site holds a lot of historical value that is easily overlooked without knowing the significance behind the symbolic marker.

Route 66 passes by Santa Rosa, but an alternative route extending from it is rooted in the history of migrating west. In 1849, more than 100,000 people made the journey to California in search of becoming a success story during the Gold Rush. Travelers were not only Americans traveling east, but globally from people in search of buried treasure.

There were several popular routes to reach California, one of the most rigorous, including sailing to Panama on the Atlantic side and crossing Central America on horseback before boarding another boat ride up the Pacific.

Journeying across America seemed like the fastest route, but many people opted for alternative solutions due to the travel conditions. Traveling across the US from East to West meant crossing over unchartered lands often inhabited by Native Americans and attempting to cross the California border’s mountain passes.

Trail of the Forty Niners marks one of the popular routes that travelers used to take when making the brave journey to cross the US. Tens of thousands of people traveled along the route established by US Captain Randolph B. Marcy, an expert in navigating the nearby Sante Fe trail. He helped develop the alternate route in search of a faster, safer route for families to pass.

Today, the marker signifies an alternative route for people traveling along Route 66. It’s a small detour from the road but allows visitors to commemorate one of the original routes traveling West.

It’s a spot you won’t want to miss when traveling in Santa Rosa, and there are a few things to do at the site:

Drive westbound on I-40 between Arkansas to New Mexico to see the commemorative plaque located at Mile 252. The site is an Official Scenic Historic Marker set up by the New Mexico Historic Preservation Division with the following inscription:

“To give gold-seekers another route to California, Capt. Randolph B. Marcy and Lt. James H. Simpson opened a wagon road from Arkansas to New Mexico in 1849. Although very popular with the Forty-Niners, Marcy’s Road was still never as well-traveled as the Santa Fe Trail. Here the route parallels I-40 to Albuquerque.”

Now that you know a bit of its history be sure to take photos at the plaque to show that you’ve been where countless travelers trotted before you.

The Trail of the Forty Niners plaque is located at a rest stop along the interstate. Thanks to the historical marker, it’s grown in popularity and has several features worth stopping to see.

The rest stop is much more than a place to fill up on gas or take a bathroom break along your journey. You can enter inside to see the quirky decorations – most notably a life-sized stuffed bear. The stop has several souvenirs about Route 66 and the Trail of the Forty Niners so that you have something to take back with you.

If you’re traveling with kids, you can even treat them to ice cream at the onsite Dairy Queen.

Relax at the RV park

The rest stop is also an excellent place for RVers exploring nearby Santa Rosa. The stop has an RV park so you can rest for a bit before heading off to the next attraction.